In this note I would like to show you how to create a piece of mobile app’s backend, which uses geospatial data. Instead of conventional demo showing how to make simple nearby queries e.g for some restaurants, I demonsrate how to build a piece of backend for an app like Tinder.

Teoretically we could use any database for storing the latitude and longitude and make nearby-queries using universal mathematical formula known as Haversine formula. Below I present two django views. The first uses a standard MySQL database (but in fact it could be any database offering the basic math like cos, sin) and the second one makes use of GeoDjango (with PostGIS behind):

Well, we could use an even more minimalistic approach (and neglect details like the curvature of the earth, which for small-radius-nearby quries is really not a big issue) and use an approach like this demonstrated by me on stackoverflow that is: filter objects between certain lattitudes and longitudes, the interesection of which forms a square circumscribed about circle. One more thing we then need is to filter out objects inside the square and outisde the circle (pooint-center > radius), which can be done in Python to avoid further database overload.

Writing raw SQL queries isn’t too elegant, and its usage in Django is seen as an antipattern. Additionally we stick to a certain database, and we lose the easiness (given by django’s ORM) of switching between different databases. On the other hand the choice of GeoDjango is also a kind of small limitation, we can choose among the following database backends:

but thanks to the choice of GeoDjango we can get rid of writing raw SQL queries, and whats more we get plethora of classes and methods to deal with geospatial data, what will be described bellow.

Mentioned database backends support the geospatiall functionallity to a diffrent extent. Their comparision can be found here.

Because it offers the most powerfull functionality for GeoDjango, and is an extension of one of the most popular databases for Django development - postgres.

As said, using GeoDjango we get a plethora of classes and methods to deal with geospatial data, which I’ll try to briefly discuss here:

Let’s start with avaliable datataypes for storing our geospatial data:

there are two ways of intialization:

It is worth noticing, that while registering in the admin model with geospatial data types, we get support with simple map widgets for selecting Point, Polygon or path. The sad thing is that the default backend is not using Google Maps, but rather very poor maps. But it is possbile to replace the default maps with GogoleMaps using django-google-maps. 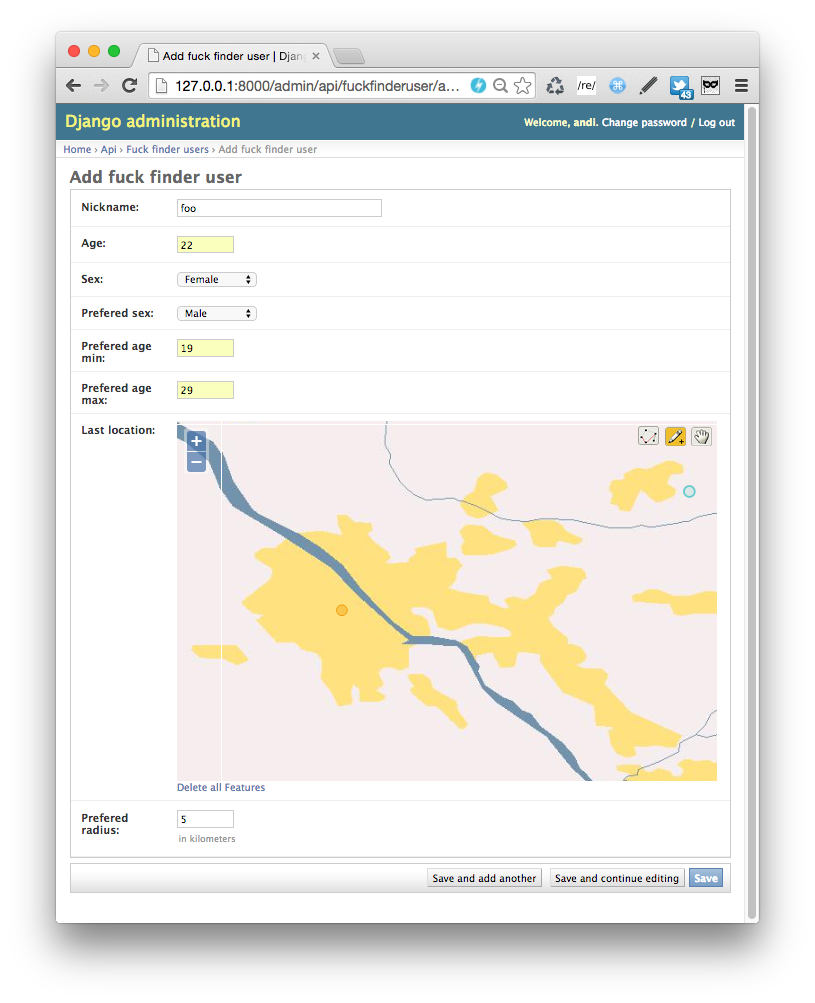 The next important element of the module is django.contrib.gis.measure allowing different kinds of measuring the distance between points and other objects. Class Distance (can be also aliased by D) also allows easy manipulation of different units of measure (avaliable measures). In this module we find also the class Area very handy every time we need to deal with calculating A geographic area.

We appreciate GeoDjango fully while using spatial lookups and distance lookups offering us rich possibilites of filtering geospatial data. Below a short list of methods, which can be applied to fields of class GeometryField:

Let’s call our demo app “FuckFinder”, what in my opinion is a good reflection of the philosophy of Tinder.

In this demo we limit ourselves to creating:

b) crucial view responsible for finding useres matching users criteria and of course most importantly matching the criterium of geolocation, and returning calculated distance between users.

info hot to install postgis can be found here: http://postgis.net/install/

after connecting to db we need to add geo-extensions:

as a tupple we add it to django settings:

we use as db backend in django:

and NOT standard postgres django.db.backends.postgresql_psycopg2

and in INSTALLED_APPS add:

To test API preformance we need first generate some resonable big data, to get such run:

In a deterministic way we create:

Let’s check what is response time and how big is the retuned JSON for:

For me the response time was 46 seconds (of course it may vary depending of hardware you have), and the size of returned JSON was above 20MB. It is not acceptable for mobile devices which often use the mobile network, and even on WIFI it is not a resonable size.

Let’s have a look if order of filtering [sex+age, geo] vs [geo, sex+age] will make a difference. It differs only by 3 seconds. Not a big deal.

Let’s have a look at the automatically created index in postgres:

Let’s try playing with adding indexes to all other fields:

After doing so, we get even worses results. Let’s try doing it for resonable fields (age, sex), which shouldn’t change in time a lot.

We made something better, but still we are transfering huge JSON (more than 20MB).

How we can make it smaller, and make our API more efficient? We can introudce pagination of results.

The idea of pagination is simple, we split results we want to serve into pages containing only k-first results, and link to the next result page, and on futrhter pages also linkt to previous ones.

To implement pagination we will use django_core.paginator, as well as PaginationSerializer from Django Rest Framework.

The calculated on the go distance field in queryset and our geo field last_location require explicit information on how they should be serialized. We specify it in to_representation of Serializer class.

better version of views.py with use of pagination:

The use of pagination seems making a big change for our problem. Even someone desperate for love probaly wouldnt browse through several thousands of results at once (in our example without pagination it was: 89,5k !!) ;-) While setting pagination to k=20 results, we came down from 20MB repsonse size to 5KB, and the repsonse time is less than 2 seconds.

Full code can be found here: